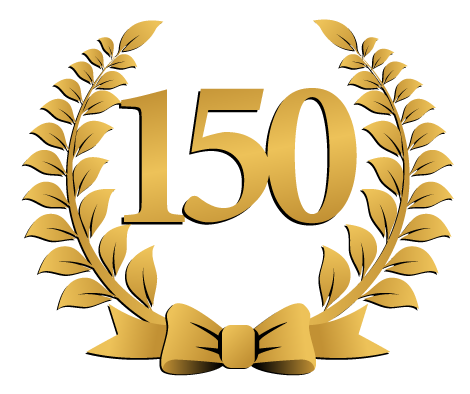 Menu
Get a Quote
Menu

Ede’s were established in 1869 and have evolved from quite literally a small horse and cart run business owned by greengrocer William Ede into the award winning commercial relocation specialist it is today.

We pride ourselves on our excellent reputation and believe our achievements are best judged from the feedback we receive from our clients. 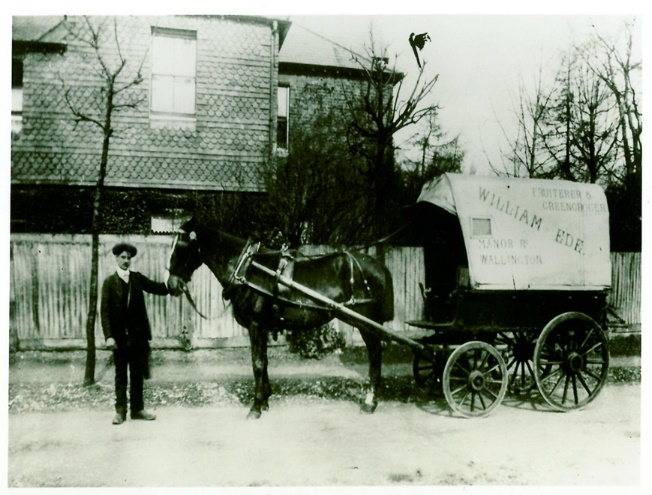 Our story begins in 1869, when a Greengrocer called William Ede began offering the services of a horse and cart to his customers who needed to relocate their belongings. At that time there was a straight choice between using the coalman or the greengrocer, and Mr Ede had the foresight to diversify his well-established fruitier business, based in Manor Road, Wallington and set in on track to become one of the largest relocation companies in the country. 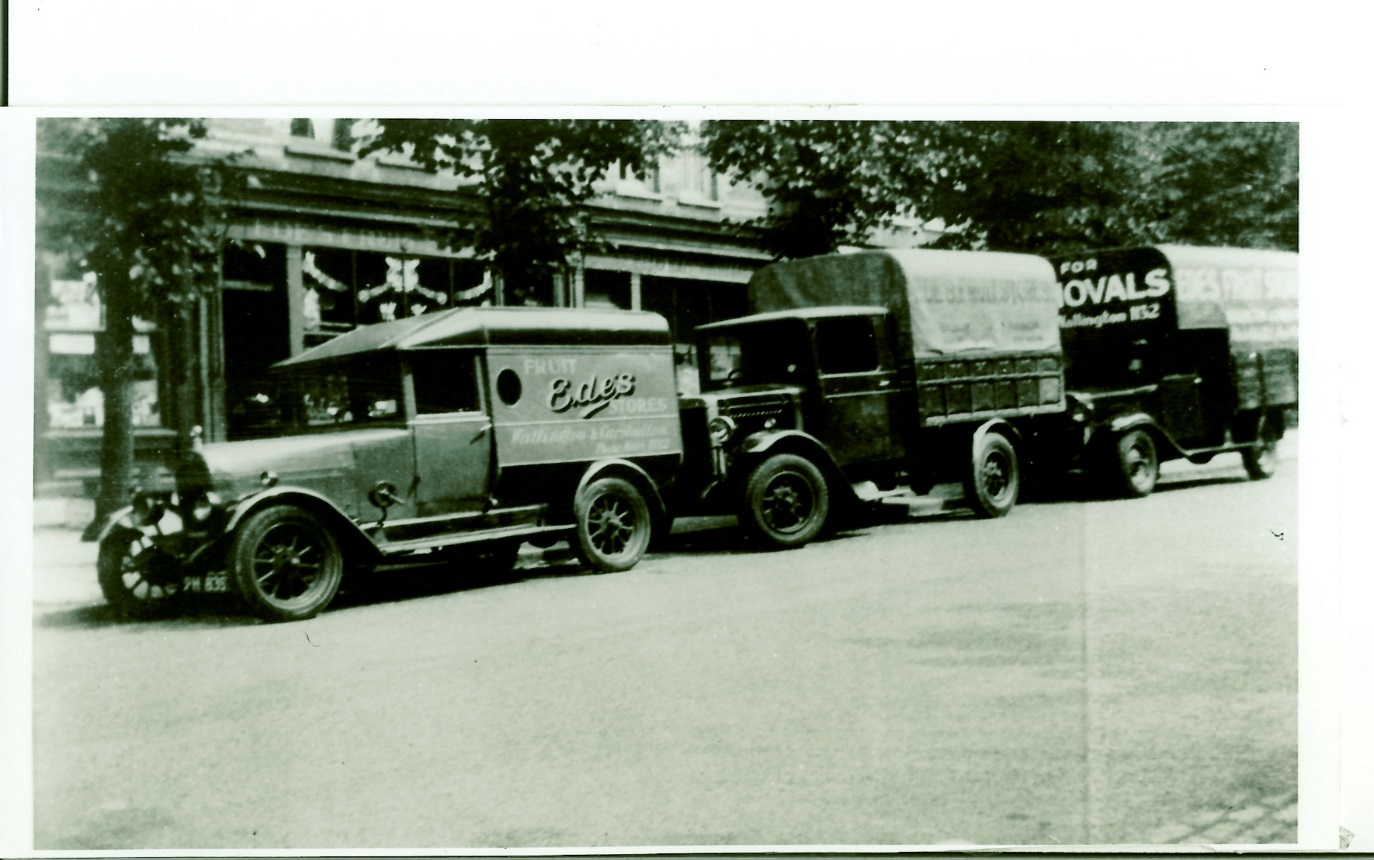 Some 50 years later, the company was still based in Manor Road, Wallington and while still a Fruit and Veg company at essence, the relocation and storage division of the business had continued to flourish and establish itself as the market leader, providing outstanding service to local customers. 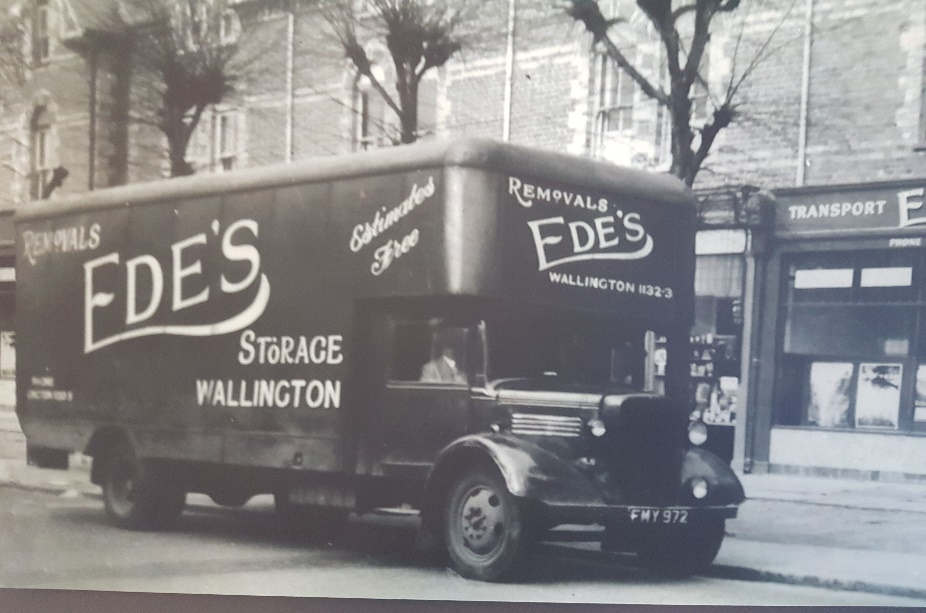 By the mid 1930’s the company had fully moved into the Domestic Relocations market, focusing on providing Storage, Export Packing and Removal services throughout the borough and beyond. 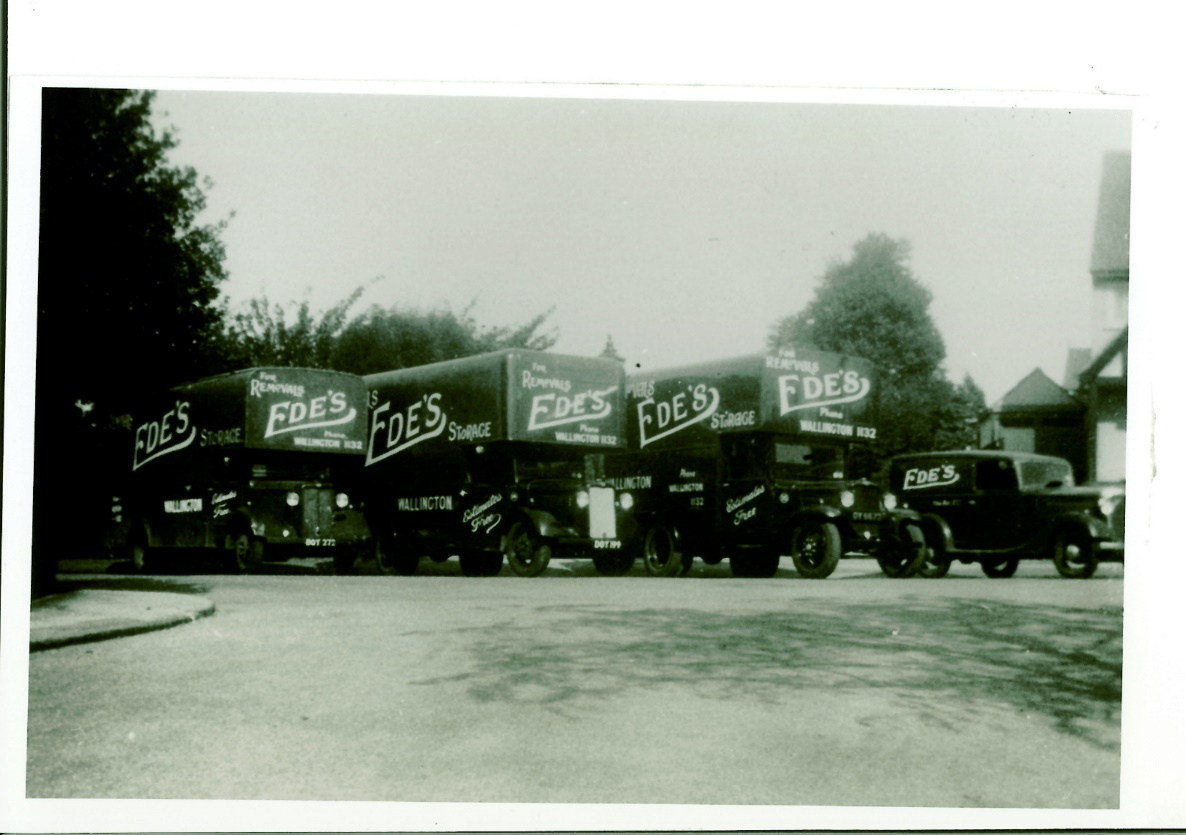 With the acquisition of new premises in Guy Road, including office buildings, a lorry maintenance workshop and re-fuelling facilities, the company turned its attention to the lucrative European domestic relocation sector. Offering relocations and shipping services across Europe, Ede’s became renowned as the market leader in the industry 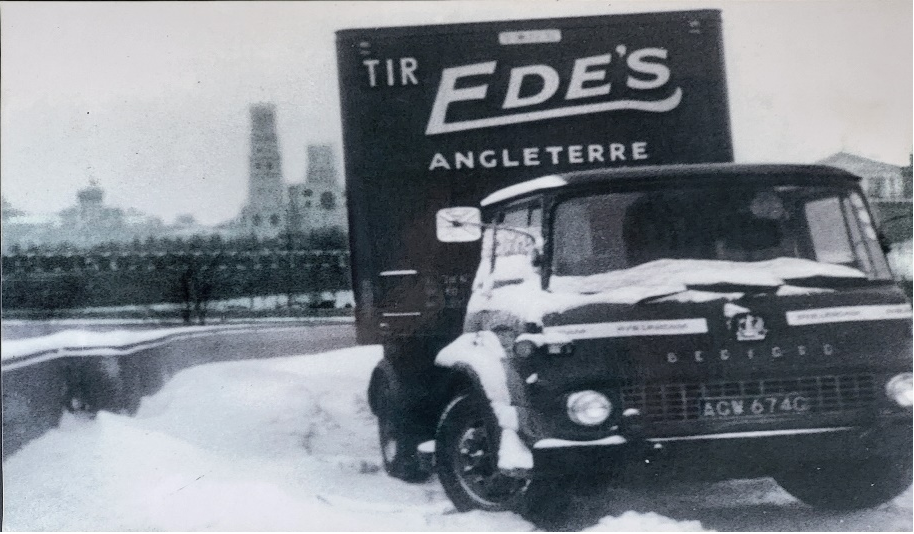 During the 1960’s and 1970’s the company was operating some 30 vehicles between Europe and the UK. From Paris, Madrid and even in the snow of Moscow, the Ede’s brand became a common site, undertaking shipping and relocation works and building on its dependable and trustworthy reputation. 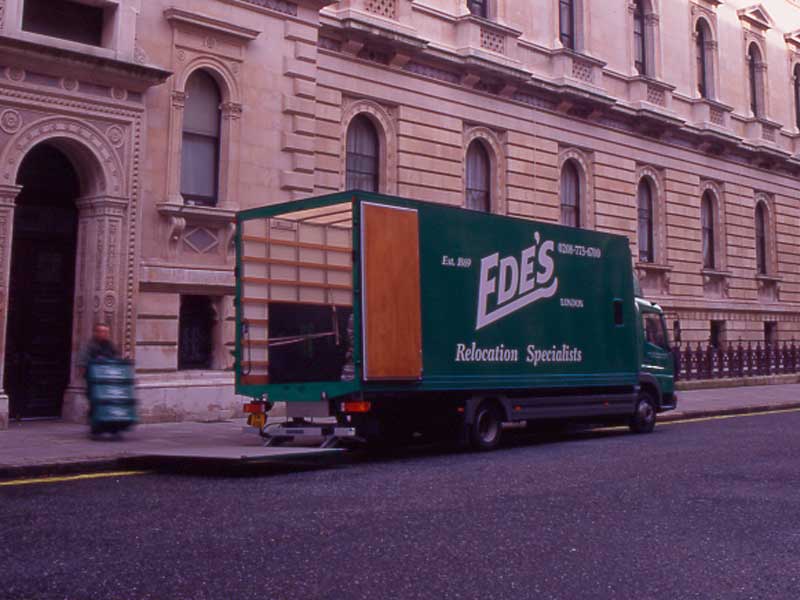 In the early 1980’s there was a dramatic downturn in the European relocations market.

However, the company continued to provide domestic moves for customers at home, providing excellent levels of service, built through the experience they had forged over the previous 110 years. 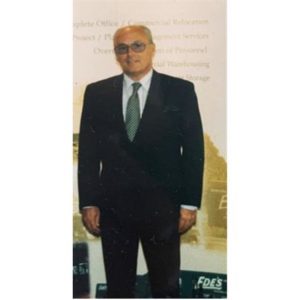 In December 1991, Tony Smith, who for 25 years, had been a director and part owner of one of the leading household and office moving companies, decided to purchase W. Ede & Company which was now based on the Felnex industrial Estate, off Nightingale Road in Hackbridge.

Identifying that W. Ede was an old, well respected, name but needed new direction and input, he decided immediately to direct the focus and direction of the company into an office and commercial relocation removal company. 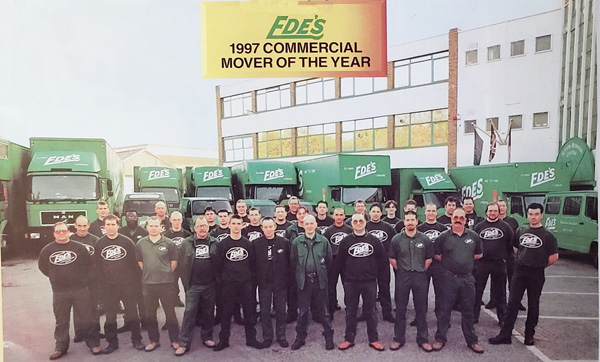 Under new leadership and with dedicated, experienced employees, willing to meet and exceed client expectations, the company rapidly grew and in 1996, relocated its headquarters to Restmor Way, Hackbridge. Offering expansive storage capabilities to corporate customers and outstanding levels of customer focused service, they were soon recognised by the British Association of Removers.

In 1997 Ede’s were awarded Commercial Mover of the Year, which is the highest accolade in the Commercial Relocations industry, and an award that Ede’s would go on to achieve on an unprecedented six further occasions 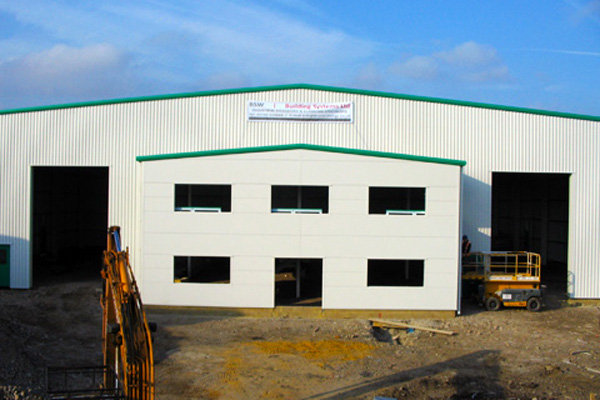 A significant milestone came in 2010 when Ede’s took the decision to move from its long-standing home in Wallington and relocate to a purpose-built warehouse and headquarters in Garth Road, Morden. This facility, was designed with environmental concerns at its heart, incorporating renewable energy from photovoltaic cells, heat recovery, optimised natural daylight and high thermal performance.

This was the steppingstone in enhancing Ede’s services, and instrumental in ensuring that environmental and sustainable practices were embedded within the core of the business.

In 2019 we celebrated an amazing 150 years of service within the Removals industry. 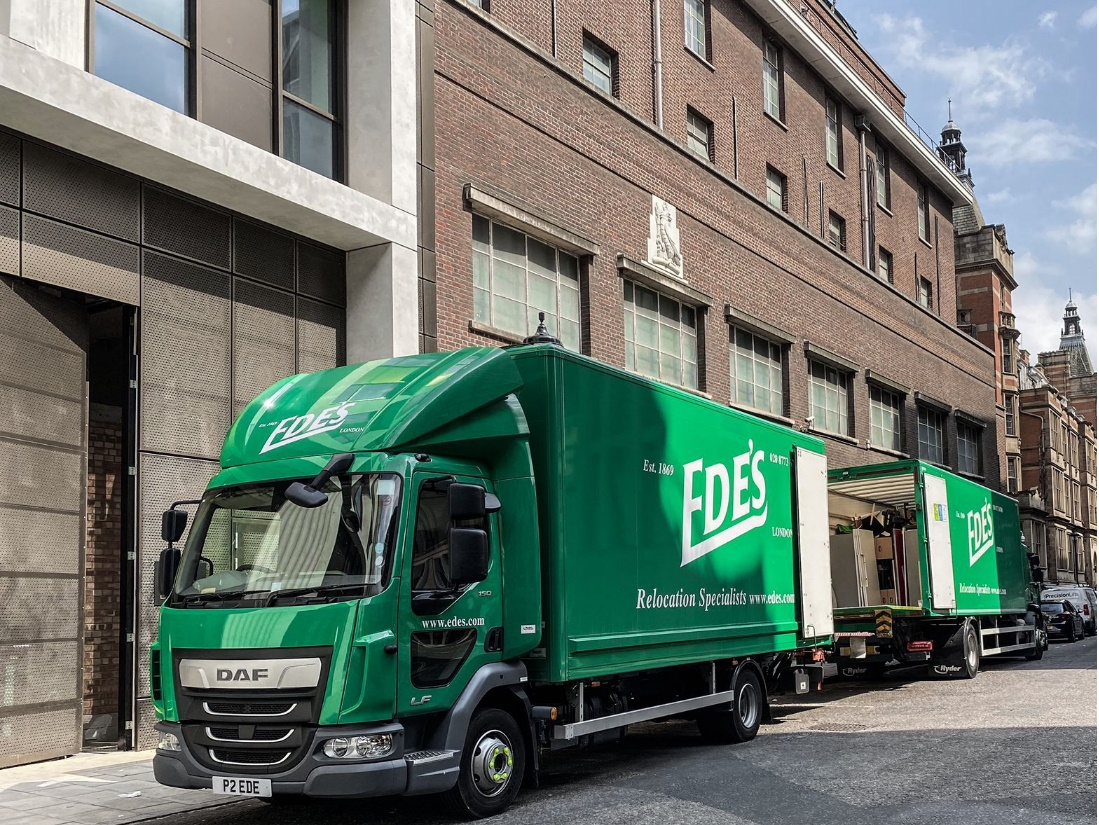 From humble beginnings to a multi award winning company, our name and quality of service is established, recognised and renowned. Our focus as always, remains to provide the most ethical, sustainable, and environmentally conscious services to our customers.

Our aim in the coming years to expand our business even further, through training and investment we will remain the front runner in our industry, by embracing change, incorporating new technologies and looking forward to next 150 years.

2022
★★★★★ 5/5
Hi Andy, Just wanted to say a MASSIVE thank you to the team for Saturday! They did an amazing job again – I can’t thank them enough for making the whole process so easy for us. Personally I’ve been dreading it for so long but it all went like clockwork – they’re like a well-oiled machine and also lots of fun Thanks to you too for keeping me calm! If I ever have the misfortune to have to do an office move again, I’ll be dialling your number!
Leigh-Anne ButlerExecutive Assistant
The RHS has been working with Edes for a number of years and have always provided a high quality and efficient service particularly for our more complicated office moves. They are quick to respond to any questions and changes and it is a pleasure to work with such a friendly and helpful team! Thanks
Katie JonesDeputy Operations Manager,
RHS Hampton Court Palace Garden Festival
Thank you from myself, Leila, Katie and everyone at SMG. Now everyone understands why we use yourself and Ede’s 😊 Indeed, from the co-owners to the new hires everyone is delighted - as it all just happened 😊  (They think by magic but we all know it’s hard slog gets it done).  I have worked with Ede's for over 15 years and through numerous offices moves and numerous companies. I can’t recommend them highly enough.
Frank TindleDirector of IT and Facilities, Supermassive Games Ltd
I have had the pleasure of working with Ede’s for over the last 20 years, throughout this time I have had the pleasure of dealing with several different operatives undertaking small two-man relocations to a team of 15+ undertaking a full building clearance as well as staff relocations. I can say that throughout this time everyone I have worked with has been professional and an absolute pleasure to work with and nothing has ever been too much trouble.
Deborah FrazerProject Manager (Schools Minor Works)
One I’d like to say thank you for everything you completed for KC last year. Nothing was too much and our last minute changes were completed with ease and a smile. Kind regards
Felissity FrancisFacilities Services – UK Offices Real Estate and Facilities Management
Hi Michael, I have been busy running between 2 offices since Sunday, but I would like to say thank you. The move went really smoothly, and your team is amazing as always! Best, Karolina Complyadvantage
Karolina Complyadvantage
First off I want to say a huge thank you to you and your team for an amazing moving day experience! The team were professional, super quick and nothing was too much hassle - such a lovely group of guys, we couldn't fault them in any way - I think I can speak for Toby and Alyx on this too. Many Thanks again
Mollie Mollie Wetherill Office and Experience Manager | HiBob
Hi Michael,Just a quick note to say that your guys did an amazing job earlier this week, we are all moved into our new home.Thanks again - will make sure to get in touch next time we move as well!
VeronikaTerchspace
Thank you to your team for such a smooth move - they were absolutely brilliant and lovely to have onsite too. The security at Berkeley House also commented how they were in and out without any fuss. Best regards
Sheri Selby Cap10 Partners LLP 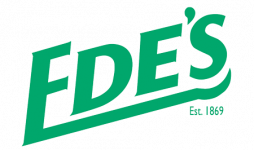